This page uses Google Maps. The map will be loaded from Google-Server and some of your data may be used by Google. In order to see the maps, please click accept. You can also click here to see further information related to this.

In order to perform this action you have to login 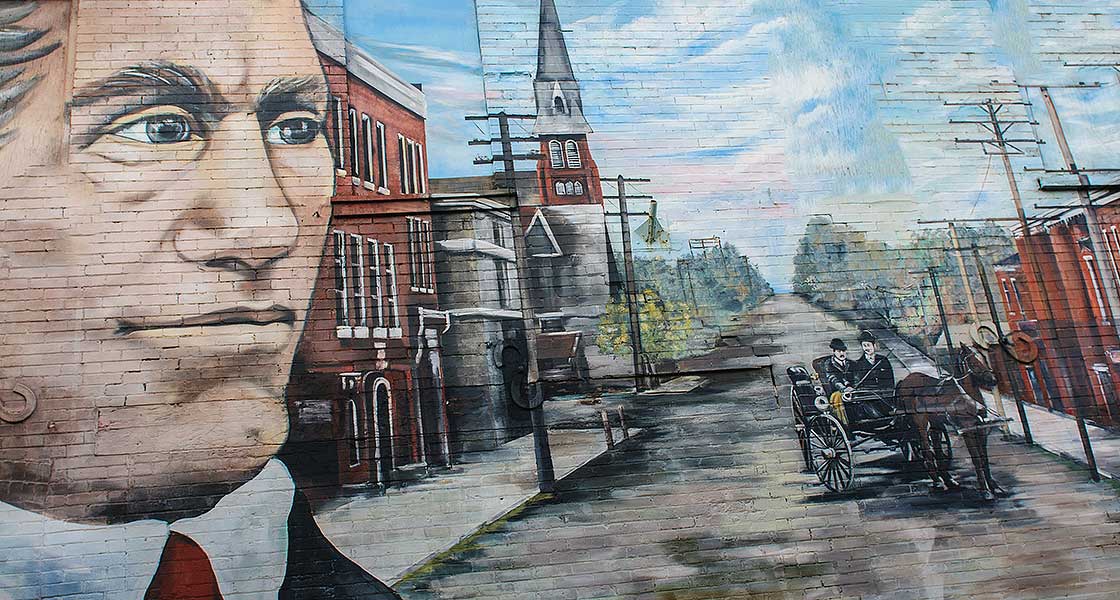 The Land We're On

Georgetown is situated on the Credit River about 45 Kilometres from Toronto and 60 Kilometres from Hamilton. Downtown Georgetown is located on the Treaty Lands and Territory of the Mississaugas of the Credit First Nation and the TraditionalTerritories of the Haudenosaunee and the Huron-Wendat. We would like to acknowledge and thank all of them for sharing their land with us.

1800' - George Kennedy and the Barber brothers

In the early 1800's, George Kennedy sailed across the Atlantic to find home here in Georgetown. In 1837, it was reported that there was only three families living in the area of his mill known as “Hungry Hollow”. It was the enterprising Barber brothers who in 1837 bought a wooden mill and foundry from Kennedy and renamed the small settlement Georgetown (presumably after George Kennedy).

The Barber brothers’ business flourished and attracted other industrialists such as the Dayfoots who arrived in the early 1840s and became pioneers in the leather and shoe trade in Ontario. It was the papermaking business, however, which the Barber brothers had operated since 1854, which became a real source of prosperity to the Georgetown community for over a century.

Just as the excellent sites for water power and ponds in the early 1820s and the opening up of the York (or Toronto) to Guelph Road (now Hwy 7) in 1827 helped to establish this area as a settlement location, it was the building of the Grand Trunk Railroad through Georgetown and the Hamilton and North West Railroad that confirmed Georgetown would be the centre of commerce and industry in the north Halton area. Georgetown grew rapidly during the 1850s and 60s. By 1864 it had a population of 1250 and the citizens decided that it would be in their best interests to “have the management of their own local affairs in the hands of men of their choice”. An application was made to Halton County Council for incorporation as a Village. This was granted on December 16, 1864.

The 1860s and 70s saw further growth and prosperity. The Georgetown Herald newspaper was founded in 1866. Culp and Mackenzie started to build their award-winning carriages on Main Street in 1860. The Creelman brothers founded their knitting machine company in 1876. The Bank of Hamilton opened a branch office in Georgetown in 1875, and the first chartered financial institution in all of Halton County.

By the 1870s and 80s the village was undergoing architectural change. Wooden frame homes and public buildings built as early as the 1840s and 50s including stores, churches and schools were being replaced by brick and stone edifices. The new Chapel Street School and Baptist Church where both completed in 1869, the Town Hall in 1878, while the new high school – designed by prominent Toronto architect Edward Lennox – was completed in 1887. A walk around the old village of Georgetown today, looking at dates on the corner stones, will confirm that the 1870s and 80s were the heyday of architecture Georgetown.

By 1891 Georgetown had installed its first waterworks system. Springs on Silver Creek Hill were piped by gravity from approximately 5 kilometres north-west of the village.

Georgetown didn’t receive its first power from Niagara Falls until 1913, but John R. Barber had commissioned in 1888, the Cleveland Brush Company to build a 60hp motor and 100hp generator for the Barber Paper Mill on the Credit River. This undertaking is reported to have been the first long-distance transmission of hydro-electric power for manufacturing in North America.

In 1901, H.T. Arnold, a tanner, and J.B. Mackenzie, a lumber supplier, both expanded their Acton business to Georgetown. John A. Willoughby erected a store in 1906 for his livery and bus business. The building now houses Branch 120 of The Royal Canadian Legion on Mill Street. William Smith and Benny joined forces in 1919 in Georgetown to produce one of the more successful lines of electrical wire devices.

By 1917, The Toronto Suburban Railway provided yet another means of transportation for passengers and goods between Toronto and Guelph.

The Georgetown Station on Main Street (at the current Canada Trust site) was a familiar landmark, but the venture failed in 1931, due to the depression and the advent of the automobile, as well as the proximity to the Grand Trunk (Canadian National Railway) line.

By 1921 the population of Georgetown had reached over 2000. This qualified the village to petition the County to declare itself a Town. This happened in 1922 with LeRoy Dale, a prominent lawyer in Georgetown since 1914, serving as the community’s first Mayor for seven years.

The Depression and World War II brought difficult times to Georgetown but the residents pulled together. It was during this period that The Royal Canadian Legion Branch purchased Willoughby’s former livery stable on Mill Street.

In the early 1950s Rex Heslop arrived in Georgetown with his plans to expand the town with large residential, commercial and industrial development. Construction began in 1955 and attracted some industry to Georgetown, but the industrial base did not materialize to support the local demands that accompany a growing residential area.

When the federal government under John Diefenbaker decided to cancel the Avro Arrow project in nearby Malton in February 1959, over 600 Georgetown area people became unemployed virtually overnight.

In 1962, another residential subdivision development, Moore Park, was announced in the west end of Georgetown on the old Moore farm. By 1960 Georgetown had reached a population of 10000 and a year later the community had its own hospital.

1974 Halton Hills is established and GO train comes to town

In February 1974 the first GO Train pulled out of Georgetown. This was reminiscent of an earlier effort by the Toronto Suburban Railway to offer a Toronto passenger service to Georgetown residents. The passengers rode in efficient, streamlined, two storey passenger cars. This time, however, they didn’t stop at the mill ponds so the conductors could drop a fishing line and “try their luck” as they had some 50 years before on the Radial line.

On January 1, 1974 Georgetown was absorbed into the new regional town of Halton Hills. The most significant changes in the town since then included the Georgetown South residential expansion on land once owned by Heslop and later the McLaughlin Group. Construction started in 1989 after several years of debate at the council chamber and courtroom.

Long-term growth in the town in part awaits the proving of water capacity. The Official Plan currently sets the population service limit at 37 400. Urban Georgetown in 1996 had a population of 24 300.

Civic pride in the community, grew when the old Congregational Church (built in 1877 and deeded as a free public library in 1912), became part of the town’s Cultural Centre.

A controversy over the location of the Halton Hills municipal building was finally resolved when the new complex opened in 1989 on Maple Avenue directly across from the North Halton Golf and Country Club.

The paper industry, so dominant in the early years of Georgetown and a source for economic stability and employment for over 130 years, ceased with the closing of Provincial Papers (originally part of the John R. Barber operation) on March 31st, 1991. The Georgetown Coated Paper Company (which was opened by Edward Fleck in 1910) became part of Domtar and closed its doors in 1977. 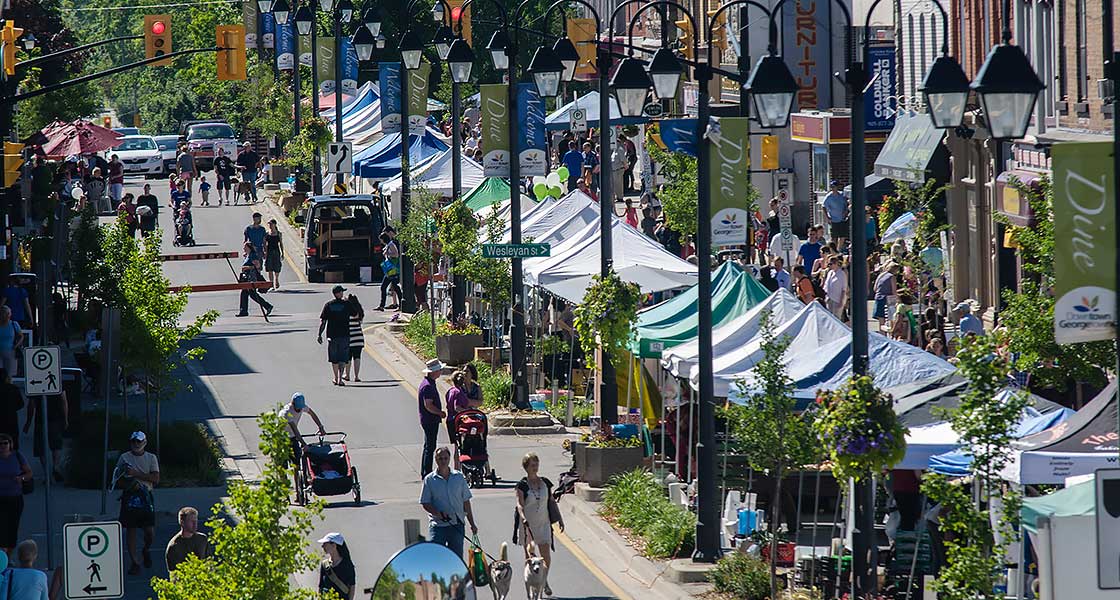 Over the past two decades, the industrial area of Georgetown has prospered and contains numerous large, medium and small industries including: Mold-Masters Limited, CPI Canada, Neilson Dairy, Cooper Standard, BASF Canada, and Baltimore Aircoil. Industries in Georgetown continue to expand and presently there are virtually no vacancies in the Georgetown Industrial Area.

Although there is room for expansion in the older industrial area, it is anticipated that much of the new industrial growth will take place along the Halton Hills 401 Industrial Corridor. Commercial Development in Georgetown has also taken place over the same period of time, providing residents with a wide variety of retail options. In response to increased competition, Downtown Georgetown is today active and vibrant with a greater variety of retail and service uses than there have been for many years.

The present for Downtown Georgetown and for all of Halton Hills is bright: The future is even brighter.

For more information on the living and business benefits in Halton Hills please contact the Economic Development office for the Town of Halton Hills or call 905-873-2600 ext. 2343.

Images in this section were generously provided by The Esquesing Historical Society.